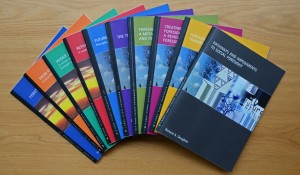 The Australian Foresight Institute Monograph Series was published from 2003 to 2006. In addition to the soft cover edition shown here the series was collected and re-published in a hard cover library edition in 2007. These publications were part of a research program on Creating and Sustaining Social Foresight that was supported by the Pratt Foundation, Melbourne, to whom grateful acknowledgment is due.

Integral Futures: Breadth Plus Depth Equals Foresight with Insight An in-depth review by Andy Hines can be found here.

In the preface of his book, The Foresight Principle , Richard Slaughter describes the present reality of planet earth as one of declining natural systems and a human species on the edge of survival. He goes on to say that ‘however the human race chooses to deal with this difficult time the answer will, I feel, be bound to involve foresight’.1 Webster’s dictionary defines foresight as, first, ‘an act or the power of foreseeing, prescience’, second, ‘an act of looking forward’, and third, ‘action in reference to the future, prudence’. Read more

The ‘emancipatory tradition’ in futures studies, if broadly defined, spans the work of many scholars, writers and peace minded individuals the world over. To name a few would do insult to the many that have made contributions. Critical futures studies, as an intellectual practice that aims to critique reified and oppressive social structures and destructive cultural traits, also fits within this emancipatory tradition. Read more

Wider and Deeper: A review and critique of S&T foresight exercises in the 1990s – Andrew Wynberg

Science and technology foresight (S&TF ) exercises have been undertaken for the last four decades in over twenty countries. This monograph evaluates S&TF  exercises from the perspective of critical futures studies. It first looks at the various objectives and methodologies that have been used in S&TF  exercises during the 1990 s. The success of the United Kingdom’s 1995  Foresight Programme in setting new research priorities and establishing new networks is evaluated. An assessment is made of how S&TF  could benefit concepts from the wider field of futures studies, and how several concepts could be fruitfully integrated into S&TF . Finally, a critique of the process used by Australia in 2002  to set national research priorities is included as a case study. Read more

Reframing Environmental Scanning: A reader on the art of scanning the environment – Joseph Voros

This monograph grew out of a special issue of an organisational environmental scanning newsletter I edited while working as the Strategic Foresight Analyst in the Foresight, Planning and Review unit (FPR ) of Swinburne University of Technology from mid-2000 to the end of 2002 .1 FPR  is the university’s own top-level administrative strategic planning body; its Director reports to the Vice-Chancellor and President of the University. Read more

The notion of teaching and learning explicitly about futures in education is not new. It is well over thirty years since the first school and college classes were held. Since then many hundreds of school based innovations have subjected these initial ideas and practices to a variety of iterations and tests. What they collectively tell us is that young people are passionately interested in their own futures, and that of the society in which they live. Read more

I am delighted to introduce this AFI monograph on the Transformative Cycle, or T-Cycle for short. It has taken some years to arrive. The underlying concepts originated in my PhD on Critical Futures Study and Curriculum Renewal submitted in 1982. There I had assembled a wide range of material that, overall, embodied numerous attempts to put forward ideas, proposals and propositions about the near-term future. What was clear then, however, and is even clearer now, is that most of these ‘new ideas’ were, and are, doomed to fail. I was intrigued as to why this should be. Later it became obvious that social systems must necessarily resist change, often for very good reasons. But that, of course, is only part of the story. Read more

Foresight Practice in Australia: A meta-scan of practitioners and organisations – Jose Ramos

How the possible, probable, or preferred futures of Australia will unfold is a grand and encompassing question, yet a personal and important one for many. Will Australia find itself mired in regional conflicts, or forge lasting and peaceful futures globally? Will Australia ignore the limits of its environment, or find practical solutions that create conditions for long-term environmental sustainability? How will the economic system evolve to reflect issues of inequality and sustainability? These are difficult questions that are far bigger than any one person or institution, yet ignored at great peril. Read more

Valuing the future is at the core of a developed foresight capacity which, when overt and explicit in individuals and organisations, provides the base from which social foresight can emerge. Social foresight manifests as the routine use of foresight by individuals, organisations and institutions, via considered and systematic thinking about the future, integrated with knowledge of the past and present. Government foresight is regarded as one key to the emergence of social foresight, for government policy today will have consequences well into the future, and it is sensible to try and understand that future as much as possible before making these decisions. What is decided in this first decade of the twenty first century will continue to affect future generations well beyond the lives of those making the decisions, but this explicit responsibility to protect the interests of future generations is lacking from much government policy and business activity. Read more

Foresight and philanthropy have both existed, in one form or another, for centuries. It took the former to justify the huge efforts required to construct huge walls around ancient cities to protect them against anticipated attack. The granaries of ancient Egypt did not arise by accident but by deliberate efforts to moderate the vagaries of nature and hence the impacts on human beings. Similarly, philanthropy, the act of giving, is just as ancient and can be seen throughout human history. Read more

This paper draws the AFI research program ‘Creating and Sustaining Social Foresight’ and the Monograph Series to a conclusion. It outlines key features of the AFI program, including the other nine monographs published over three years from 2003 to 2005 inclusive. It considers the limitations of conventional views of the future in the immediate regional (Australian and New Zealand) context and also why the future still appears to be a ‘missing dimension’ in so many places, including a variety of related debates and publications. Attention is drawn to the significance of two areas of published work. One deals with what has been termed the ‘global problematique’ and provides a broad brush context. The second considers how these issues manifest in the Australian context. By drawing on work carried out at the AFI over these years it is possible to approach these concerns in fresh ways and discern new ways forward. Read more