It’s fair to say, I think, that SF provided much of the impetus and motivation for my early interest in human futures. I read it avidly as a child and my interest only grew over time. Then, at some point during my teens a key underlying question emerged – why were so many depictions of ‘the future’ decidedly bleak? It was not long before my search for answers led directly to the real-world issues later referred to by the Club of Rome as the ‘global problematique’.’

Another decision point arose when I realised I had to choose between ‘real’ futures and ‘fictional’ ones. After competing my PhD in 1982, I seriously considered the notion of becoming an SF writer and, over the next few years, made occasional forays into what I saw as a lively and fascinating domain. In 1985, for example, I produced the winning entry to an essay competition for Yorcon 3, the main UK gathering of authors and fans that year. The essay was expanded for Foundation, the leading academic journal of SF at the time, and published in 1986. I was proud of it then as a statement of theory. I’d express it differently now but still feel that the general argument has merit. 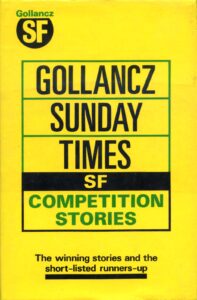 The following year the Sunday Times announced a short story competition and I jumped at the chance to try my hand at an actual story using Bermuda – where I’d lived for 6 years – as the background location. It was also a chance to put some of the theory into practice. To be brief, my one and only SF story did not win, but it was selected with other runners-up for the Gollancz / Sunday Times SF Competition Stories volume published in 1987. I’d shown I could write SF, I suppose, but I also knew that, behind the occasional glamour, lay a much more demanding reality. Many of the writers I knew quite well were not exactly rich and appeared to be under semi-continuous pressure to produce their next ‘masterpiece.’ In finally choosing to focus on ‘real’ futures I ‘found my tribe’ and, with the help of mentors and others, grew into the field. Over time it proved to be a deeply satisfying, if not aways easy, choice. The fragments presented here were fun to write and are, in part, evidence of a career that never was!

What do we do now the future is here?

(Expanded version of the above for UK SF journal Foundation, 1986.) During research at the interface between futures study and education I have often been surprised at how people tend to associate the former with prediction. I suspect this indicates a need for reassurance, a search for security, a response to the disintegration of contemporary structures and meanings. But neither futures study nor speculative literature have been concerned to predict the future, or even to forecast it. Rather they utilise a range of views of the future as a means of elaborating the present. Read more…

The Genius of Frank Hampson 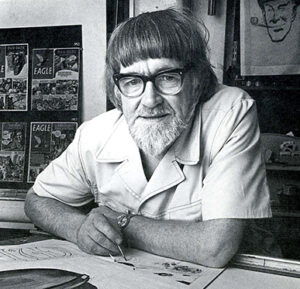 I’ll always be grateful for the chance to meet artist Frank Hampson at Seacon, Brighton, 1979 and to thank him personally for the way he inspired a generation of kids, including myself! The following tribute piece was written many years later.

Once a week a copy of the boy’s comic, The Eagle, slipped into this small world of mine. As a child, of course, I had no idea where it had originated, how it had been made, or why. All I knew is that each week something marvellous fell into my hands and I was immediately transported elsewhere. Read more… 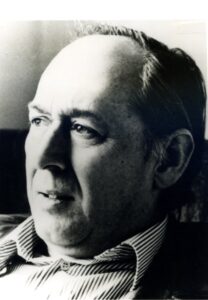 J.G. Ballard was a gentle, courteous man with a soft, southern English accent.  Yet he had a vision of startling originality.  His fiction, which explores our hidden obsessions with media, technologies, landscapes, gained him a solid international readership.  Perhaps more than any other, Ballard drew our attention to the new – often powerfully subversive – ways that mainstream cultures can be undermined by the very tools and innovations which sustain them.  This ambiguity drove the mythologies that emerge in his work. Read more…