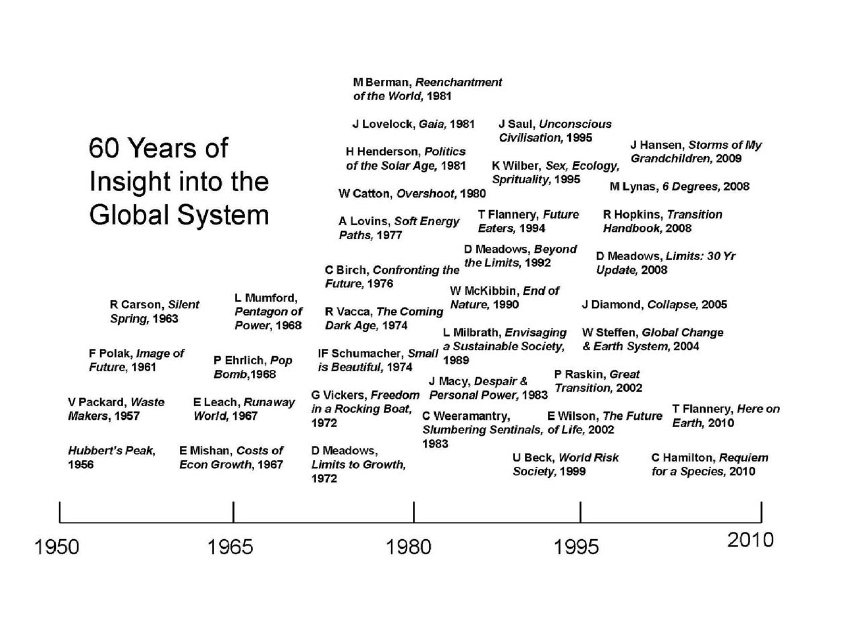 Overview of / Introduction to “Missed and Misused Signals”

One section of ‘Chapter 2: Conventional Responses’ in R. Slaughter’s book, The Biggest Wakeup Call in History (BWCH), refers to ‘missed and misused signals’ during the past 60 years. Precisely because these ‘signals’ have been ‘missed’ or either ‘misused,’ it is important to review their historical relevance, for many of them still serve as ‘foresight reminders’ that global civilization can only afford to ignore at its own peril. Though the window of time is still open to change course, it is at the same time rapidly closing, and as it closes so goes the options available for alternate/preferable futures.

Thus, this section is meant to review the relevance/pertinence of these sources in more detail than given in BWCH. Now, in reference to the ‘Missed and Misused Signals’ section, a number of carefully researched works during the twentieth century, particularly during the past 60 years, provided humanity with a wide range of relevant signals about the ‘state of the world’; however, these signals were not only ignored and denied but also, in many cases, they were deliberately undermined and distorted by ideologues representing the Powers That Be, expressly for the sole purpose of maintaining the present, disastrous course of business as usual.

Dr. Slaughter refers to a number of works from the US and Australia: in 1956, the publication of Hubbart’s Peak – a graph that accurately predicted the peak of US oil production within mainland American by 1971; R. Carlson’s publication of Silent Spring in 1962, describing the impact of pesticides on birds (and other living creatures); P. Elich’s Population Bomb, though overstating the immediate dangers of population growth, nevertheless, drew attention to the long term dysfunctional aspects; Frank Herbert’s anthology for Earth Day 1970, provocatively entitled, New World or No World, dramatically capturing the sense of the fundamental changes needed in the U.S. and, by extension, other developed (or over-developed nations); speeches by Jimmy Carter and his chief environmental advisor, Gus Speth, alerting the impact and dangers of global warming (at a time when it had not yet been fully accepted by much of the scientific community); likewise, Jim Hansen, a respected NASA scientist and well-known environmentalist, who made many valiant attempts to get global warming on the U.S. agenda.

The aforementioned are only a sample of missed and misused signals from American sources that will be reviewed in more detail in this section, as well as others,[1] which will be mostly drawn from “60 Years of Insight into the Global System.”[2]

Chapter two examines conventional social responses to global change. Among the most significant is the reception accorded to significant ‘signals of change.’ The track record of ‘missed signals’ is outlined in two countries – the US and Australia. Evidence is presented that those responsible for wise government and social policy have missed or ignored information that provides vital evidence about global change processes. Overall, the social capacity for detecting and interpreting such information is shown to be inadequate. The issue is also approached through looking at the occurrence of disasters and again, it is suggested that the track record here is problematic. Two other manifestations of ‘business as usual’ are reviewed. One is the widespread habit of looking to new technology to save the day. Another is the rise of consumerism and the deliberate stoking of demand through pervasive advertising. Overall, conventional responses impede progress in understanding and dealing with the world we’ve collectively created. (Read more…)

A visual commentary of these and related issues from Part One of BWCH can be found here.

View from the mid-Twentieth Century

Dennis Morgan explores The Challenge of Man’s Future by Harrison Brown which was first published in 1954. Since it dealt explicitly with key global variables – including population growth, resource depletion, alternative energy and food production – he sees it as one of the earliest ‘missed signals’ that speaks to our time. Read the review here 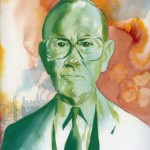 Another individual who took this work forward was Charles Birch, Professor of Biology at Sydney University. His Confronting the Future, first published in 1976, is a clear, modulated, articulate and well-researched overview of these same issues but with an added emphasis on their human, ethical and value dimensions. Three items are provided here. First, an outline of the 1994 update; second, an interview I conducted with him in that year; third a short paper that I wrote a few years later. The latter was a forerunner to my later more in-depth treatment of these issues – The Biggest Wake-Up Call in History. The image of Charles Birch is by Spooner from issue 1 of the Commission for the Future’s magazine 21C, 1995.

Read an outline of Charles Birch, Confronting the Future here.

A 1994 interview with Charles Birch can be found here.