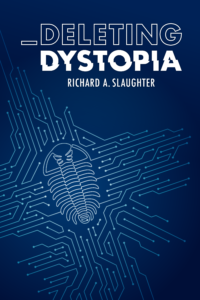 Deleting Dystopia confirms that these existential threats are real. But, in place of apathy and fatalism, the author explores ways of understanding them, conceptualising solutions and identifying viable strategies. Taken seriously and widely applied, he suggests that the latter can help us avoid the worst of digital authoritarian futures in favour of those founded on humanly viable values and practices.

Also listen to author, Richard Slaughter discuss his new book with Luke van der Laan in this video. A shorter version of the video is also available.

The artwork in the book, which was created by Samara Hoffmann, can be accessed and reused under a Creative Commons Non-Commercial ShareAlike licence.  The cover is by Tara Mann.

Please feel welcome to share these promotional flyers with your network.

The IT Revolution Reassessed - Part Two

Part two of this series summarises suggestions for ‘reform and renewal’ offered by Astra Taylor, a New York based writer, filmmaker and activist. It’s a ‘middle-of-the-road’ approach that’s well worth taking seriously (and augmenting with other accounts). We then draw on Misha Glenny’s... Read More

The IT Revolution Reassessed - Part One

The Poisoned Chalice - Another Casino for Brisbane

When the state government under Campbell Newman announced that there would be a ‘competition’ to select a design for a new casino it neglected to enquire if the people of Brisbane actually wanted one – especially on a prime riverside site in the heart of the CBD. Then, when a ‘winner’ emer... Read More

Day One: The Big Picture, Griffith University, Brisbane, 13th October 2015 It’s rare to attend an event such as this one that ticks nearly all the boxes. When my wife and I decided to register it was simply on the basis that it offered three consecutive sessions on issues of ma... Read More

Governance for the Future

There’s no doubt that the new-look government announced today by Malcolm Turnbull will transform what had become a moribund and unpopular government under Tony Abbot. A younger cabinet, more women and a fresh agenda all signal a fundamental shift in focus and perspective. This, we are being told, ... Read More

Overshoot Day 2015 - The Biggest Story of the Year?

In Australia, as in most other places, Thursday August 13th 2015 came and went without any particular fanfare or comment. Yet on that day the Global Footprint Network (GFN) issued a press release that was picked up and commented upon mainly, it seems, by certain on-line ‘niche’ media. It turns o... Read More